Bravada Gold Corp. has commenced fieldwork at the Highland gold/silver project, located in Nevada's Walker Lane gold trend. The 2020 Phase 1 US$250,000 exploration programme will be conducted by Bravada and funded by option/joint-venture partner OceanaGold US Holdings Inc., a wholly-owned subsidiary of OceanaGold Corp. 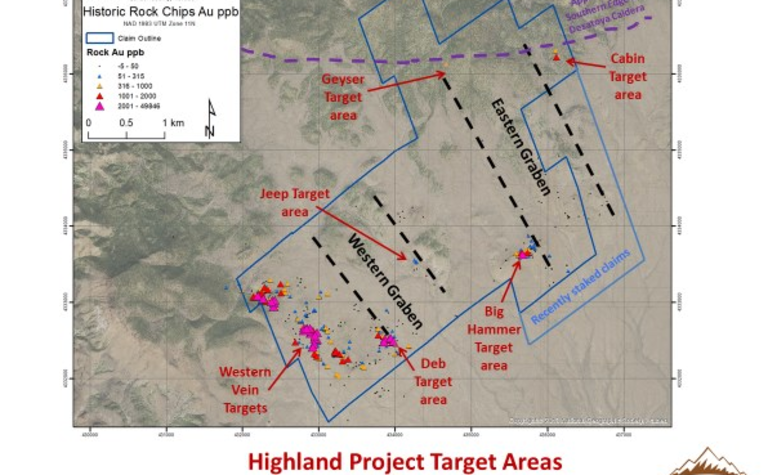 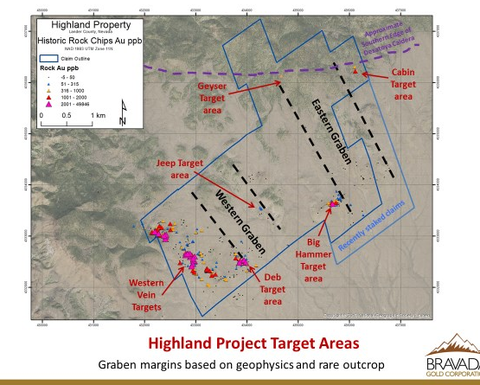 Although Bravada and previous partners intersected high-grade gold and silver in drill holes on the western portion of Highland, most of the property remains untested due to poor outcrop exposure and extensive shallow gravel cover. OceanaGold's 2019 work programme focused on the eastern portion of the property where minimal erosion is indicated by the presence of extensive sinter.

Potentially high-grade gold mineralisation may lie beneath sinter as indicated by widespread gold anomalies in surface samples. Combining OceanaGold's 2019 work with pre-Bravada shallow drilling and Bravada's previous mapping and sampling in the area has resulted in the identification of several attractive target areas.

Graben-margin faults are often important channel-ways for low-sulfidation fluids and high-grade gold/silver deposits may form where the fluids boil at some depth below the paleosurface. The gold-depleted fluids may continue up to the paleosurface where they form sinter pools.

Anomalous gold values are widespread in surface samples along the Eastern Graben and the extensive area of usually barren sinter exposed in the Eastern Graben indicates that zones of gold deposition should be preserved in their entirety.

Previous drilling by Bravada's US subsidiary at the Western vein targets and surface gold anomalies along margins of the Western Graben and Eastern Graben demonstrate a large and vigorous gold system. The best hole drilled by Bravada was H02013 at the Western Vein Targets, which intersected 1.5m of 66.9g/t gold and 397.7g/t silver within a 12.2m intercept of 9.5g/t gold and 109.4g/t silver, with true thicknesses estimated at 65 per cent of the respective intervals. 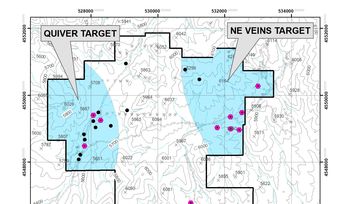 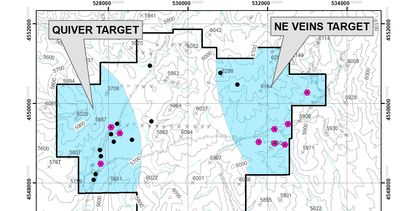