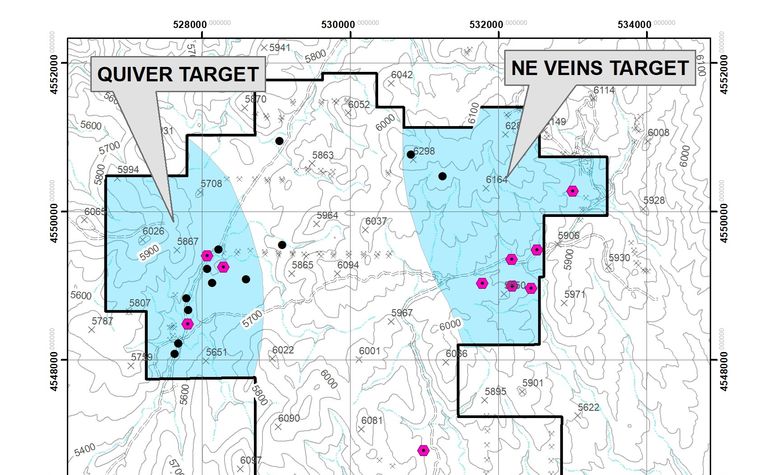 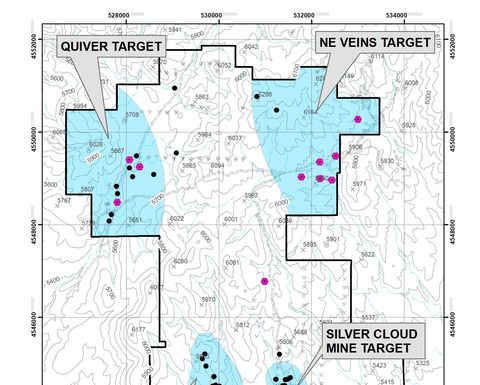 Blackrock Gold Corp. has reported the commencement of drilling at its Silver Cloud property, a low-sulphidation epithermal gold and silver project consisting of 572 unpatented mining claims

This fully-financed programme will consist of up to 3,500m of drilling in 14 reverse circulation drill holes across four distinct target areas.

The bulk of the drilling is focused on the newly delineated and yet untested NE Veins target, where eight outcropping veins have been mapped and identified. This target sits atop a large geochemical and geophysical anomaly that was identified during the 2019 field season and is situated near the workings of a historic mercury mine. This represents a compelling target, as the geologic setting shares many similarities to Hecla's Hollister mine, an east-west trending series of veins of which lies 3km east of the target area.

The purpose of this programme is to determine whether Silver Cloud represents the western extension of this notable deposit. Drilling is expected to be completed by mid-December, though will be dependent upon the weather.

Andrew Pollard, president and CEO, commented: "This is a campaign that we've been looking forward to since we first identified the outcropping veins and geophysical anomaly at the NE Veins target area during the summer of 2019. Untested targets like this, directly adjacent to a prolific, high-grade system in what is the richest gold mining area in North America, are incredibly rare to just stumble upon. Management has always had an unwavering belief in the prospectivity of Silver Cloud, in fact, it's the reason why I joined the company in the first place and armed with a plethora of new data, we're excited to bring the most expansive drill programme that the project has seen since 2002."

Eleven drill sites have been permitted for the Silver Cloud fall drilling programme. Several of the sites will have multiple drill holes completed from the same drill pad. All drill holes will attempt to drill through the volcanic package to intercept the Paleozoic units beneath. The geologic setting is similar to the near-by Hollister mine located 3km to the east.

Four target areas are the focus for this round of drilling:

SBC19-003 was drilled at azimuth 30 with a 65-degree dip from the same pad as SBC19-002. The core was strongly oxidized to 206m. A northwest oriented breccia/fault zone was logged at 187m, and the fault is interpreted to have offset the east-west vein system intersected in SBC19-002.

The company completed detailed mapping and reviewed assay and soil geochemistry from the 2019 exploration programme. Newly acquired induced polarization data has been reviewed, interpreted and used to target the drill programme.

Six drill sites have been permitted to test the outcropping veins, soil geochemical anomalies and geophysical (gravity and IP) targets. The drill holes will pierce the veins down dip near the postulated contact with the Paleozoic basement beneath the volcanics. The geologic setting is similar to the near-by Hollister mine.

Three drill sites have been permitted in the Quiver target to follow up on gold encountered in Newmont drill holes from the 1990s. Drillhole IV90726 encountered 1.782g/t gold over 1.52m. At the time, historic operators were exploring for near-surface oxide open pit deposits, not high-grade veins. Blackrock's drilling will follow up on the known gold intercepts as well as test a gravity anomaly in the area.

One drill hole in the centre of the project is targeting the margin of the Silver Cloud graben at the intersection of two prominent structures identified in the gravity survey. 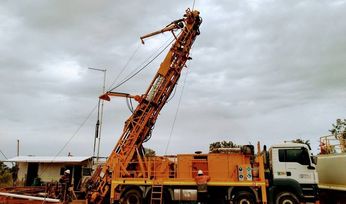 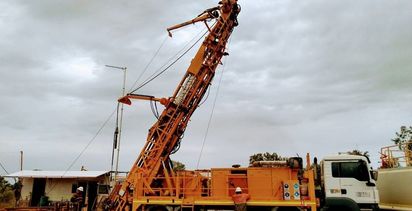