Master Drilling Group unveiled its Mobile Tunnel Boring (MTB) solution to the mining industry at African Mining Indaba at the start of last year. Eight months later, at the commissioning stage of the technology, Nia Kajastie was invited to see the machine at a quarry near Rome, Italy. 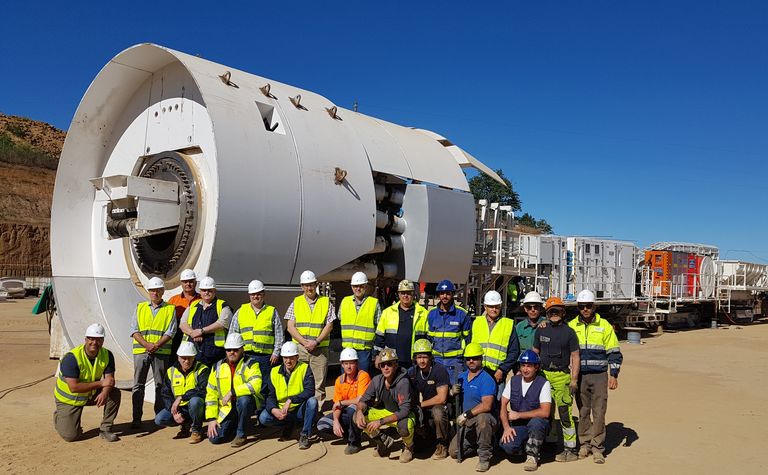 In October, the MTB successfully completed its commissioning, tunnelling through 10m of tuff at the quarry, while being visited by a host of potential international clients

The MTB, which is the result of a collaboration with Italian tunnel-boring machine (TBM) manufacturer Seli Technologies, was going through the last steps of mechanical assembly when I visited the brick quarry in September, on behalf of GDI.

Back at the test site, the MTB was being put together in its larger 32m long, 5.5m diameter configuration aimed at access tunnels for hard-rock underground mines.

The starter frame, cutter head and five shield segments were in place, while the tracked back-up units, including the support bolt drills, 1,500kVA transformer, 400m capacity water and electricity cable reels, and a bunker backup unit with 14m3 storage capacity, were set up a few metres behind it.

The 4.5m cutter head was also being set up on-site; it is designed for use in smaller access tunnels and contact tunnels.

In October, the machine successfully completed its commissioning, tunnelling through 10m of tuff at the quarry, while being visited by a host of potential international clients.

While the first machine has yet to be allocated to a specific project, Master Drilling - or Master Tunnelling, the division that will operate the MTB - confirms it has witnessed a lot of initial interest. The next potential step could be a 1km trial at an underground mine, which could then be extended into a production contract.

MAKING A CASE FOR BORING

While TBMs are nothing new within the mining industry, Master Drilling's solution - based on the same proven TBM technology - offers a smaller, more flexible and modular design.

Van Dorssen told GDI that the MTB was developed due to its clients' need to reach orebodies that are currently being left behind - with miners going deeper, they need a continuous solution that is quicker and safer.

"The standard tunnel-boring machine is difficult to apply to generalised mining conditions. In mining it's not just going from A to B. That's why we conceptualised this machine with a tight turning radius, as being mobile, as being flexible and able to work on inclinations," said Master Drilling's executive director Koos Jordaan.

Van Dorssen also highlighted that the MTB is not trying to compete with the speed of traditional TBMs. "This is a fast machine, but it's not going to be as fast as a standard tunnel-boring machine, where high advance rates are achieved through long distances that could be more than 5km; for the purpose of mining you need a much more agile concept."

In fact, the 250t MTB has a 30m horizontal and/or spiral turning radius, can operate on a 12-degree incline or decline, and is aimed for competitive production - as with conventional methods, however, the degree of productivity is dependent on the layout and geology.

The machine is also considerably shorter than your usual TBMs, which can average 200-300m. The cutting technology was selected for its proven ability to cut hard rock in excess of 300MPa.

The MTB is capable of transportation through vertical shafts, as it fits into larger cage dimensions and can be set up in areas with height restrictions as low as 2m. At the test site, the MTB was put together in its larger 32m long, 5.5m diameter configuration aimed at access tunnels for hard-rock underground mines

Offered as an alternative to drill and blast in underground development and production, Master Drilling's task is now to convince overly cautious miners, set in their ways, of the benefits of implementing new technology - while also competing against other recent innovations within the continuous, hard-rock cutting segment.

"It's challenging to bring in a new method to compete against a matured method that's been working and optimised for 40 years," said Jordaan. "Our clients are under extremely high pressure to perform, so in many cases, they only consider mature technologies."

To make the transition easier and more attractive, as a contractor Master Drilling's proposition is in the form of a service agreement. Instead of facing the high capital cost of new equipment, miners can hand the reins to Master Drilling, which can offer the machine, associated equipment required for logistics/material handling and manpower for operation.

"We've engaged with clients to understand what they need, and we've taken the responsibility, the risk to put something in place that we believe in," said Jordaan.

"While as a service company we can't develop a new cutting concept and carry all that cost, we need to offer something that is reliable that we can execute, optimise and look at the logistics of it to make it more efficient and create value."

The forerunner of the MTB project was the horizontal raise-boring (HRB) solution created for Petra Diamonds' Cullinan kimberlite mine in South Africa. The client asked Master Drilling to create a horizontal contact tunnel to link a ring road going around the orebody on the undercut level.

The MTB, in turn, needs a launching chamber, where the starting frame is assembled; to create this chamber, drilling and blasting is still required, but it can potentially be replaced by rock cutting in the future. According to a study that calculated all the tunnels excavated in a general drill-and-blast block-caving configuration, the drill-and-blast launch chamber will comprise less than five per cent of the excavated rock for the required infrastructure footprint, Master Drilling said. Moreover, in a mine development tunnel, drill and blast will represent an even smaller percentage.

For the set-up, moving and clearance of the machine, Master Drilling foresees an efficient process using a custom-designed manipulator in conjunction with a wheel loader, as well as manoeuvring the different back-up units with a temporary on-board motivator and remote control.

For the tracked components and material-handling trucks to be able to move through the round profile tunnel, a flat driving surface is created by spreading less than 5% of the excavated material to fill the invert of the tunnel. This concept was already used during the HRB project and found to be very effective.

Due to its continuous operation - including cutting, bolting and meshing - the crew will not be exposed to an unsupported face or hanging wall or roof.

Ultimately, the MTB forms a part of Master Drilling's aim to offer a comprehensive, mechanised rock cutting solution for all mine development needs.

"If you look at aspects of mining infrastructure like ventilation shafts, access tunnels, contact tunnels, ore passes, slots, production boring - we would like to build a common service offering around those hard-rock cutting solutions for establishing underground infrastructure," said Jordaan.

"We're currently developing our ability to provide the industry with a tunnelling and shaft-sinking capacity through innovative solutions providing value to our clients."

The shaft-sinking service involves the development of a shaft-boring system aimed at providing a mechanised solution to conventional sinking in hard-rock conditions.

Reinforcing its diversification strategy, in early November, Master Drilling also announced a joint venture with Italian construction company Ghella - called TunnelPro. Through this JV, Seli Technologies, which constructed the MTB, was acquired by the companies and now forms part of the new venture.

Commenting on the JV, Danie Pretorius, Master Drilling's CEO, said: "This joint venture is aligned to our strategy of pursuing a wider and more diversified footprint.

"Through TunnelPro and Master Tunnelling, Master Drilling will access projects in new sectors and across various countries, whilst providing a platform for further vertical integration and risk mitigation."