Using patented technology, the new Longyear bits have diamonds that are chemically bonded to the matrix creating a more versatile, faster penetrating, and a longer-lived bit. The new bits retain the smooth drilling characteristics drillers prefer, resulting in more core in the box on every shift for every crew. 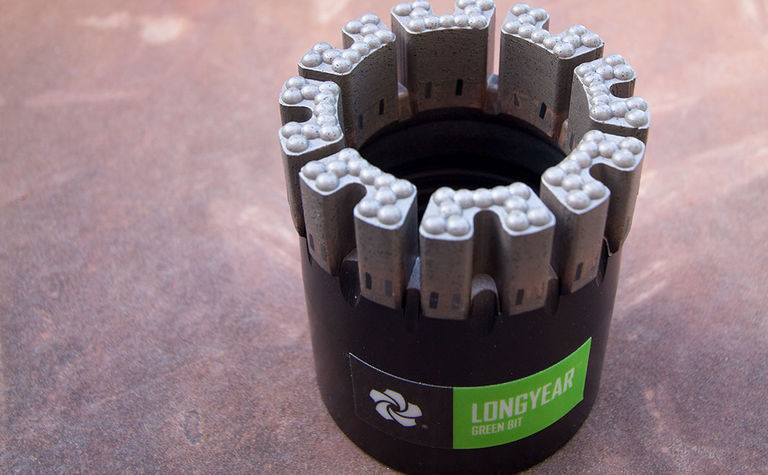 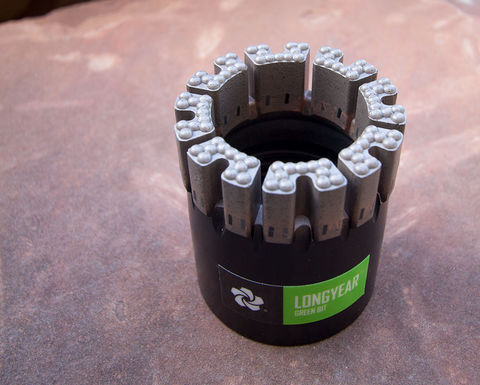 The Yilgarn Craton forms the bulk of Western Australia and is home to 30 per cent of the world's gold deposits. Within this region, the Laverton district is one of the most important gold-producing regions. Underground miners of these "nuggety" gold deposits are under significant pressure to reduce their all-in sustaining costs and improve their return. Combine each mine's sharp focus on costs with an extremely competitive diamond drilling market, and the result is the constant search for higher productivity in underground diamond drilling.

On the surface, the Laverton district is a flat, hot, dry environment with scattered acacia trees only interrupted by dry, salt lake beds, and gypsum sand dunes. The high concentration of salt results in a very saline aquifer. While the high salinity is hard on equipment it does not factor heavily into bit selection and drilling performance.

Within this host rock, the gold is typically contained within intrusive dykes of quartz porphyry near the shear and fracture networks which supported gold-bearing hydrothermal flow. The greenstone, shale and even basalts are only of medium hardness and have the potential to be cut quite quickly, while the sections of BIF, quartz and fracture zones force slower penetration rates. The ideal bit would be versatile; free-cutting enough to easily handle the occasional BIF and quartz but tough enough to penetrate the greenstones quickly.

The underground portion of the mine is decline accessed and extends 900m below the original open pit. Due to its nuggety deposit, diamond drilling tends to underestimate grade, so the mine has adopted new techniques of grade control. RC drilling has been introduced underground to produce larger sample volumes, which match well with the bulk mining techniques being used. Considering that RC drilling is typically half the cost-per-meter and three times faster, and the industry-wide initiatives to drive down all-in sustaining costs, a lot of scrutiny is paid to the productivity of remaining diamond drilling.

After optimising drilling parameters, the incumbent product's (Hayden 9AA and KS5) average performance, maxed out at 180m per bit life and 22cm per minute of penetration rate over the three months of monitoring. While solid performance, a new solution was needed to continue improving productivity.

Comparing performance in the three-month period after adoption, penetration rate increased to 26cm per minute and bit life nearly doubled, increasing to 356m per bit.

The ease of use and consistency across shifts was appreciated by the crews and helped produce measurable gains. These improvements combined to noticeably increase core in the box by six per cent. The Boart Longyear drill crews correctly observed that such long life was not driving a significant increase in productivity as reduced tripping time has less impact than improved penetration, so the decision was made to trial even more free-cutting formulas.

The next bit trialled was the Longyear Yellow (Prototype P575) again in the Stage 3 25mm configuration to line up against the competitor's KS5 and even 12-14. The penetration rate jumped to an average of 35cm per minute and life held at an impressive 300m per bit.

The Longyear Red bits achieved an astonishing 60cm per metre penetration rate and still lasted 120m. With the goal of maximising productivity, the drill crews decided to use one Longyear Red at the top of the hole and finish it with a Longyear Yellow in 25mm Stage 3. The results speak for themselves. After three months of measurement, this two-bit strategy averaged 283m per bit, still a 60 per cent improvement over the competition and 34cm per minute, a full doubling of penetration rate. The combined result put 23 per cent more core in the box. 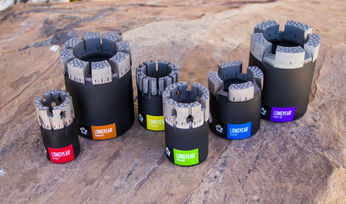 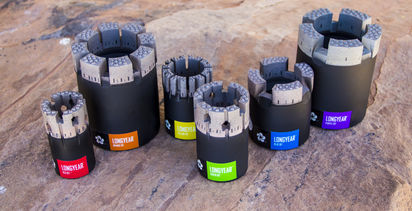