The arrival of the Rhino 100 mobile raise borer has proved a game changer for underground contractor Raising Australia, part of the Byrnecut Group. 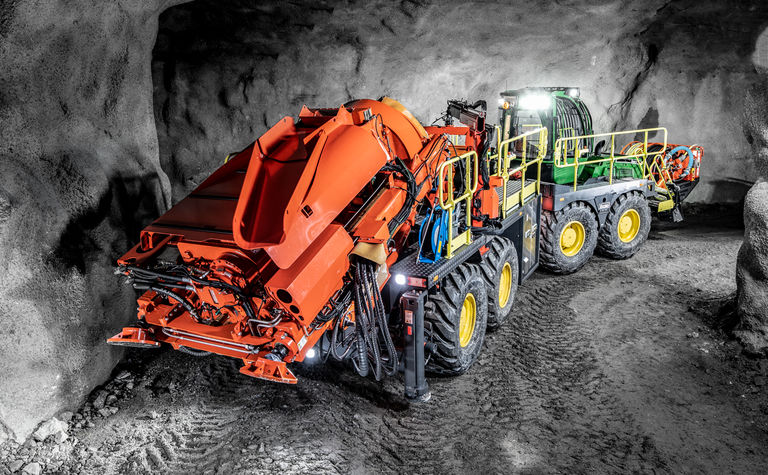 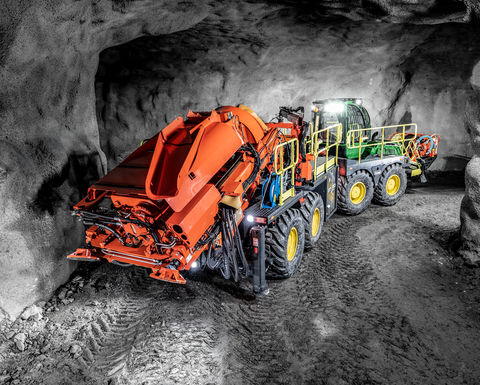 Since introducing its first Rhino in 2017, the company has been able to slash slot-raise production times, improve productivity for its customers, and significantly increase its own revenue.

‘Slot raises' play a crucial role in the development of many underground mines in Australia. Created by raise boring machines, these wide-diameter holes provide void spaces in the stope into which blasted ore can expand, improving fragmentation.

The problem is that the traditional raise boring machines used to drill slot raises are cumbersome to transport and have high demands for labour and time. It can take two to three days of preparation before drilling begins, resulting in potential bottleneck and delays in production.

So, when Perth-based contractor Raising Australia heard of an agile and highly mobile raise borer being developed in Europe, they were keen to have a look. In 2014, a team from the company travelled to Finland to inspect the Rhino 100, developed by TRB-Raise Borers and distributed by Sandvik. They were duly impressed. Mounted on rubber tyres, the Rhino 100 could travel under its own power within a mine, required just one operator, and could begin boring within 45 minutes of arrival on site.

Raising Australia initially went down the route of developing and trialling its own mobile raise borer, but in 2016 general manager Mark Hanigan inspected the latest generation Rhino 100 and realised it was exactly what the company needed. After working with TRB to tweak the borer to allow for additional drilling angles, Raising Australia took delivery of its first Rhino in September 2017.

Hanigan says the business, which is a division of contract miner Byrnecut Group, has scarcely looked back. "That first Rhino went straight to [Saracen's] Carosue Dam Operation near Kalgoorlie and it's been there ever since.

"The previous contractors were drilling 150m a month, and we have achieved up to 400m plus a month. Between October 2017 and December 2019, we drilled just under 5,000m, so we've doubled their output."

Raising Australia promptly ordered another two Rhino 100s. The first arrived in August 2018 and was sent to Northern Star's Jundee gold mine at Wiluna in Western Australia. The next was delivered in October 2018 and has been a campaign machine, travelling to a range of customer sites. The company has since ordered a fourth and fifth machine, which are being delivered in 2020 and are expected to be immediately put to work on major mining projects.

Hanigan says the impact of the Rhino 100 on Raising Australia's business has been significant. "We have significantly increased our revenues since 2017 when we took delivery of the first Rhino, and we're hoping the next two Rhinos will help us grow again.

"The benefits for our customers are also huge. It used to be drilling the slot rises that would hold up the development process. Now, they can bring the stope online when they want and not have to wait for the hole to be drilled."

In fact, so fast is the process with the Rhino 100, one of the biggest challenges for Raising Australia has been convincing clients that it will live up to its promises. "Every time we get a new client, we will tell them how it works and what it delivers, and they will be sceptical. That's until they actually see it and their minds are blown."

Jarko Salo, managing director for TRB-Raise Borers, says the positive experience of Raising Australia is common among Rhino 100 customers across the globe. In one case, a Brazilian miner reported productivity gains of up more than 90 per cent due to more efficient working techniques enabled by the raise borer.

Salo attributes the success of the rig to the ground-up approach taken during development. The needs of underground miners inspired the creation of the first mobile raise borer and TRB has continued to be responsive to feedback.

"Right from the beginning here in Finland we have listened very carefully to our customers and produced designs that fit their needs," he says.

Hanigan says the key advantages for Raising Australia are the time and labour savings the Rhino offers over conventional raise borers. While it takes a team of two people between two and three days to prepare a traditional raise borer for duty, a single operator can tram the Rhino into the mine and be drilling within a matter of minutes. As well as slot raises, the Rhino 100 can be used to drill ventilation shafts, drainage shafts, escape way shafts, ore passes and backfills.

Another key advantage of the Rhino 100 is safety. With older style raise borers, the operator is generally in the open less than 5m from the hole being drilled and must drill deep into the rock before erecting a muck chute.

"With the Rhino 100, the muck chute opens and closes," says Hanigan. "You open it up, push through the rod, and when you're ready to start drilling you can close the chute up. It covers the hole, stopping the dirt cuttings flying out and hitting the operator. The Rhino 100 also removes the exposure of the operator to the risk of flying debris as you're 6-7m away from the work area and operate from within a cab."

Raising Australia has recently begun taking advantage of the plug ‘n' drill feature of their Rhino rigs. This allows for the quick change of drilling modules to allow for down reaming or conventional raise boring. The module simply attaches to the borer, allowing for drilling even when access to the lower level is not possible. "We just finished the first hole with that module last week and it was magic," Hanigan says. "It drilled a 1.1m diameter escape way in one-third of the time of a normal raised drill."

Salo says he has been pleased to witness Raising Australia's journey with the Rhino 100. "Raising Australia and Byrnecut showed great vision in understanding the competitive advantages that mobile raise boring provides early on." 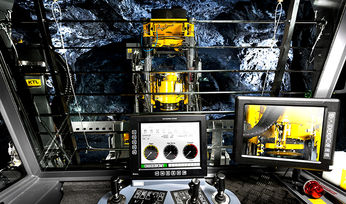 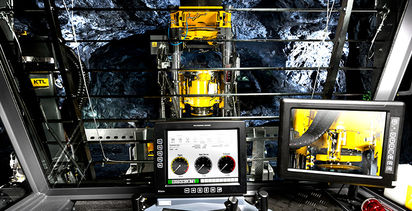