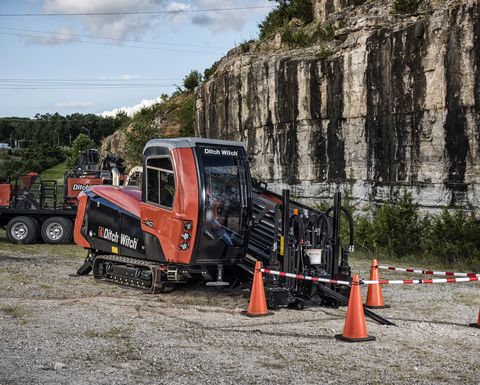 The spreading of fibre-optic networks and the overall advancement of the telecommunications market have kept the demand for horizontal directional drilling (HDD) equipment at a steady level in recent years. Adding to this the utilities sector, the trenchless method continues to be a popular way of installing everything from power cables to water pipelines.

The larger HDD machinery is often used for oil and gas projects, and that market segment has accordingly weathered the storms of weak demand and low prices.

Telecommunications will most likely continue as one of the most lucrative applications for this technology in coming years, as access to high-speed broadband is becoming the norm - even a right - in some parts of the world, and as companies continue to plug the broadband internet gaps elsewhere.

"Utility contractors and fleet managers across the globe have been busy in recent years trying to keep up with increasing demand in the marketplace, and many experts agree that increased dependence on new technology in the US and abroad will keep this industry on the rise for the foreseeable future," says Kevin Conry, senior marketing manager at Toro.

"Whether we're talking about advanced technology in energy sources like natural gas, wind and solar, or connectivity technology like telecommunications, DSL and fibre-optic installations, directional drills have become an extremely popular solution in connecting infrastructure where excavation or trenching isn't practical or cost effective due to rehabilitation requirements."

The growing number of telecoms projects has led contractors to look for equipment that combines efficiency and a smaller footprint.

He adds: "In previous years, contractors gained a smaller footprint with compact HDD rigs, but lost much of the power needed for difficult ground conditions."

Accordingly, in preparation for growth in the mid-size drill market, he says Ditch Witch continues to design HDDs that provide the necessary power, while emphasising operator comfort and a reduced overall footprint. The AT40 All Terrain drill, for instance, offers a powerful 160-gross-hp to accomplish a variety of jobs.

"To further promote a smaller footprint, All Terrain (AT) technology comfortably fits within a small setup where other drills can't fit. By utilising power from the drill instead of sending mud downhole, the drill doesn't require support equipment to send mud downhole. Only fluid management systems are required by AT motors to flush out debris from the bore."

Enhancing their rigs' productivity is naturally a key driver for HDD manufacturers. For instance, Toro's R&D teams work to provide HDD units to the marketplace that have a number of time-saving features engineered into the machines.

"The formula for saving time on the job site is simple," Conry says. "In order to ensure that the drill they purchase matches their needs, contractors should determine the minimum thrust, torque and drilling fluid requirements that will allow them to complete all the bores they plan to perform, now and for the life of the machine."

He adds: "For longer boring applications, contractors will want to select a unit that offers faster connection and breakout speed. An HDD rig that falls into this category will offer open top vice wrenches that provide the operator clear visibility to the tool joint.

"In addition to drilling productivity, contractors will want to look for features in their HDD rigs that simplify the positioning and set-up of the drill to their crew. For instance, Toro's new DD2226 and DD4050 HDD units feature dual stabilisers on each side of the unit that can be independently adjusted for increased stability on uneven ground.

"Another feature that can help minimise risk on site is the exit side lockout system. This is essentially a device that crew members on the end of the drill string must use to lockout any potential inadvertent drill string activation while tools are being changed or products are being hooked up for the pull back."

According to Michael Lubberger, Herrenknecht senior product manager for pipelines, with the new generation of HDD downhole tools, typical process problems such as frac-outs or imprecise boreholes can also be solved in an effective way.

"To drill through soil formations where HDD is not applicable or risky, Direct Pipe opens up a new application potential by combining the advantages of microtunnelling and pipe thruster technology," he says. "A prefabricated pipeline can be installed almost continuously in one step. A cutterhead that is adjusted to the geology requirements and a cone crusher can remove possible obstacles."

"To reduce footprint of pipeline installation, the compact Herrenknecht rig HK80CK (800kN of push/pull force) with a crawler is an interesting option: the compact design stands for low transportation requirements. It uses a 20ft drill pipe compared to the standard 32ft, and the fluid pump is small enough to be fitted on board. It also provides noise and emission protection, which makes the tool ideal for projects in urban areas."

Innovation in the air

In the past, the main principles of the HDD method were not fundamentally changed for many years. Pilot bore, several steps of reaming, while a bentonite mixture supports the expanded borehole and removes the soil over the entire length of the crossing; then, finally, installation of the pipeline, Lubberger lists the usual steps.

He continues: "We have contributed and encouraged advancements in the HDD process with the introduction of several new downhole tools. These tools allow for a new workflow on job sites by increasing the efficiency of the boring process.

"Firstly, our Down Hole Jet Pump cleans the borehole and removes cuttings directly inside the drill string, which is a completely new method of soil conveyance in HDD - the borehole is not a discharge line and the surface pump is not used as a discharge pump (only during pilot bore).

"To combat the risk of frac-outs, the Down Hole Jet Pump absorbs cuttings from the bottom of the borehole and pumps them via the drill string to the exit side to surface. Due to the higher velocity of the discharge fluid, the system can handle a maximum cutting size of up to 1.5in (38mm), allowing for larger cuttings than conventional HDD."

In developing the tool Herrenknecht's goal was to create a clean borehole. During operation, the operator is able to monitor the cuttings on the separation plant in real time, making it possible to create a borehole that is more than 98% clean.

The Full Face Hole Opener is a tool for excavation diameters of between 30in and 72in. It allows contractors to drill and realise the enlargement from pilot bore to final diameter in a single step in both soft ground and hard rock of up to 350MPa. With longer drilling distances, the Weeper Sub also reduces the risk of frac-outs. It does so by gradually increasing the volume flow in the borehole.

So, over the last few years, in tandem with the growing demand for the technology, innovations and enhancements have been made to HDD products across the board.

HDD equipment, generally speaking, is getting more sophisticated, and some HDD manufacturers are embracing that sophistication, but trying to do so without complicating an HDD operator's already complex workload.

"The driver behind increased equipment sophistication is simple: using technology to become more productive," Conry adds. "Toro's newest solution in response to this demand is the new directional drill operating system, TDOS-1 with SmartTouch. The new system allows pipe handling functions to be performed using a single input on the joystick in SmartTouch operating mode.

"We designed TDOS-1 with SmartTouch in response to end-user feedback. We've heard from drill operators that every second counts when it comes to pipe handling cycle times, and SmartTouch makes it possible to perform more functions at the same time."

Ditch Witch's Matthesen says that its AT technology is one of the most recent innovations to help operators improve their efficiency on hard to navigate and remote terrains.

"What differentiates the AT system from conventional mud motors is it's use of the drills power to efficiently drive the bit," explains. "At the core of the AT system is dual-pipe technology, which has an inner drive shaft that reaches back to the drill so it can physically control exactly how much horsepower is sent downhole.

"The switch from mud motors to AT technology provides operators a more efficient power option. In comparison to the 50% of power sent downhole with mud motors, 95% or more of the drill's inner drive power is successfully transferred downhole using AT systems."

According to Tod Michael, product manager for Vermeer's Trenchless Core Products, in the end the latest features that are being added to the machinery depend on the market that's being served.

"Some markets want rod-by-rod data, such as pull forces or improved bore path mapping; some customers want machine health and utilisation data; and some customers most appreciate reduced noise and job site disturbance," he lists.

In general, most Vermeer HDD models have received higher performance specs and have also gotten heavier due to engine emissions requirements.

"Because of weight and footprint increases, we have seen a trend toward smaller drill models doing the work larger rigs once completed," Michael notes. "This is possible through spec increases, and the development of new models like the Vermeer D23x30 S3 Navigator and better drill practices."

It is common for contractors to have HDD machines and support equipment working in remote locations. Many contractors are well prepared to deal with remote operations. They bring with them the potential tooling, supplies and even wear components required to help complete the job without leaving the job site. Layne now part of Granite base