Drilling under a ‘turnkey contract' has become increasingly common across sub-Saharan Africa. Under a turnkey contract, a drilling contractor is responsible for both the siting and the drilling/installation work. Turnkey contracts are paid via ‘lump sum, no-water, no-pay' payment terms. If the borehole is successful, the driller will be paid the full lump sum price, regardless of the costs incurred on-site. If, however, the borehole is unsuccessful (dry or low-yielding), the driller will not be paid at all.

Recent research in Uganda by Liddle and Fenner (2018) found turnkey contracts to be the most common contract type when the private sector provides new rural hand pump boreholes, although this has not always been the case.

Turnkey contracts rose to prominence in Uganda in the mid-2000s as implementing agencies (district local governments and non-governmental organisations) became increasingly frustrated with the number of unsuccessful boreholes that were being drilled when consultants were conducting the siting work.

Because the consultant was telling the driller where to drill if the borehole was unsuccessful the implementing agency had to pay the driller for all the work done and materials used, i.e. according to a Bill of Quantities (BoQ). Unsuccessful boreholes were blamed on the quality of the consultants' siting work, with briefcase consultants (meaning those with no formal geology or hydrogeology training) having flooded the market.

Because of the low prices they offered, coupled with a lack of regulation, these consultants were gaining siting contracts.

The solution found was to remove the consultant and hand over all of the responsibility for finding water to the driller. If the driller then drilled an unsuccessful borehole, they will not be paid as they were the ones responsible for siting the borehole. The risk of finding water of an inadequate yield fell squarely on the driller.

There is no doubt that turnkey contracts have helped to simplify procurement and contract management for implementing agencies, but how do Ugandan drilling contractors feel about the use of these contracts? Generally speaking, the drilling contractors interviewed do not mind working under turnkey contracts. However, they are dissatisfied with the lump sum prices that agencies are willing to pay for successful boreholes. Those interviewed, currently pay UGX15 - 23 million per handpump-borehole (US$4,143 - $6,353). However, drillers reported that an average of UGX29 million (US$8,101) is needed if they are to be able to conduct the siting and drilling work to the standard they desire.

Low lump sum prices are further exacerbated by the misuse of the lump sum, no-water, no-pay payment terms by district local governments, with a number of them only paying for the work done/materials used (BoQ payment terms) when a borehole is successful.

The whole premise behind lump sum, no-water, no-pay payment terms is that, while drillers will lose money on unsuccessful boreholes, they will be able to recover these costs from the full lump sums for the successful boreholes. Without full lump sum payment, drillers are unable to recover their losses. As explained by one driller: "We have implementing agencies who firstly refuse pay for dry holes, but secondly, if it is successful, they will only pay us for the metres we drilled. If you are not going to pay us for dry holes, you have to pay us a lump sum for the other boreholes; we have accounted for the losses that we make on dry holes, so we need to be paid the lump sum for successful holes if we are going to even try to break even."

Low prices and the misuse of the lump sum payment terms mean drillers often need to take shortcuts on-site in order to break even. As further explained by the same driller: "When you have silly terms in the contracts and silly prices... is it any surprise that drillers take shortcuts and that the work being done is terrible?

"Drillers cannot deliver good quality work when the prices people are willing to pay are so low, they will always be making shortcuts. They will have to buy cheaper, poor-quality materials, cost-cut when drilling, or there will be outright theft, someone says he has drilled 80m when he has actually only drilled 50 or even 40. 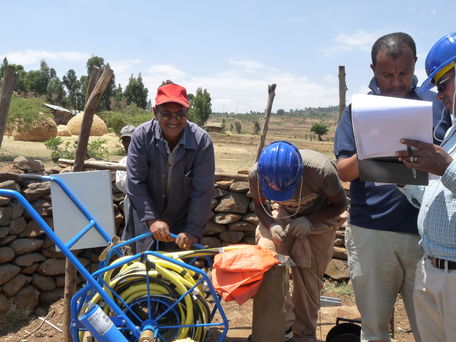 Conducting a pumping test in a community borehole, with the hand pump removed, to assess the resource potential

"It is outright criminal. Someone says that they got 800l/h but, in reality, it has 200l/h. He has been given a contract with the price is so low that he has to save money. He has to say he got water otherwise he will not be paid. But, in reality, they won't have even done a pumping test, instead, someone under the mango tree has simply written down some numbers… From the drillers point of view, you were given such a low price, you have to save money, so many have to cheat."

Low prices and the misuse of the lump sum payment terms mean that Ugandan drilling contractors are under constant pressure to prove they have found water and to save as much money as possible when doing so. The drillers interviewed as part of the study find these pressures to be a constant challenge, with the quality of the siting and drilling/installation work suffering as a result.

The quality of work issues led the Ministry of Water and the Environment to release a directive in January 2017, discouraging the use of turnkey contracts and instead encouraging implementing agencies to revert to using split contracts: one for siting (awarded to a hydrogeologist/consultant) and one for drilling/installation (awarded to a drilling contractor). Opinions among drilling contractors themselves seemed impartial; most do not mind working under turnkey contracts, they simply ask that the lump sum prices agencies are willing to pay for successful boreholes increase and that the full lump sum is paid for successful boreholes going forward.

Elisabeth Babb completed her PhD at Cambridge University in 2015, where her doctoral research looked at the problem of handpump-borehole
failure across sub-Saharan Africa through the lens of systems thinking. Her research was part of the Hidden Crisis project within the UPGro
research programme (https://upgro-hidden-crisis.org) She now works for Lifewater International.

Drilling to make a difference 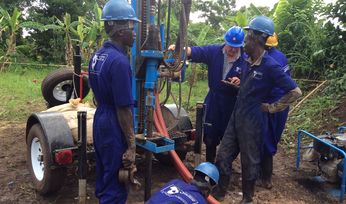 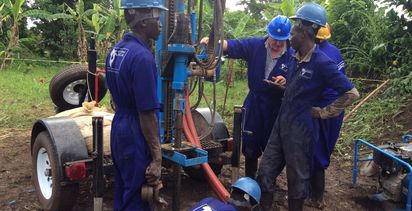