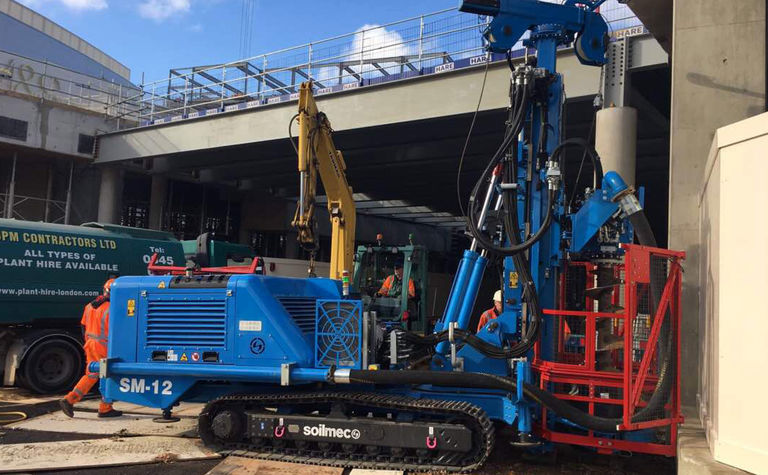 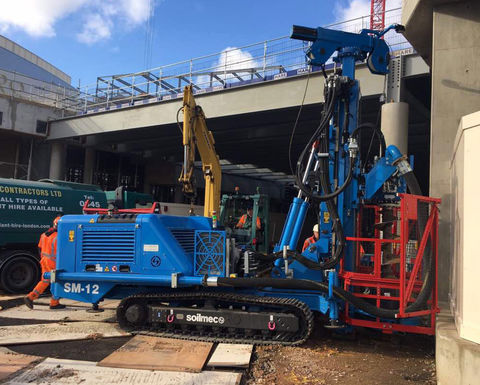 Westfield London is a shopping centre in the London Borough of Hammersmith and Fulham. Since opening in 2008, it has transformed London's retail landscape and become one of the largest covered shopping developments in the capital. In 2012, Hammersmith and Fulham Council approved the expansion to the north of the existing site that covers an area of approximately 7.7 hectares. Building works began in 2014, and the extension is due to open in March 2018. The proposed development will entail an extension to the existing shopping centre, comprising multistorey retail, residential and mixed-use space and car parks.

The soil in the work area is composed of made ground for the top four metres, underlain by a layer of Kempton Park Gravel up to 8.0m thick and a stiff layer of London Clay down to 30m. The Kempton Park Gravel formation forms part of the river terrace gravel associated with the Thames and its tributaries. It comprises sand together with gravel of sub-angular flint, chert and Lower Greensand rock types. The London Clay formation consists of blue-grey silty clay, which tends to weather to brown near to the upper surface. With depth, the clay becomes very stiff/hard and can contain some weak mudstone and siltstone.

Given the high loads, including horizontal and tension forces, deep foundations are necessary to transfer the loads from superstructures onto stronger, more compact, less compressible and stiffer soil, increasing the effective size of a foundation and resisting horizontal loads.

The continuous flight auger (CFA) process is virtually vibration free and one of the quietest forms of piling, making it ideal for densely built-up and environmentally sensitive areas.

The proposed solution for the Westfield London project was to adopt a Eurocode design allowing for load tests on working piles, using 450mm and 900mm CFA piles. The piling works were divided into two main areas: the Ariel Way and Restaurant areas. The project main contractor, Westfield Europe, entrusted the foundation works of the two areas to Central Piling, a specialist in ground engineering.

In the Ariel Way area the works interfaced with the surrounding rail authorities. The works were carried out by Central Piling's experienced team, which was piling next to rail infrastructure using a medium-size piling rig.

The machine chosen was a Soilmec SM-12 equipped with SFA (sectional flight auger). SFA piles are formed with the use of sectional lengths of hollow stem continuous flight auger, and the technology is suitable for work on job sites where available space is an issue.

The SM-12 is a restricted-access drilling machine featuring two mast lengths with 6400mm and 1,840mm mast stroke, both with a 140kN extraction force. The rig is suitable for up to 600mm-diameter auger drilling to a maximum of 6m length sections. The rig is powered by a Cummins QSB4.5 reaching up to 119 kW and complies with the emission certification Tier 4. The rotary head has a 40kNm maximum torque with the ability for 4in (102mm) concrete injection through the head due to the large swivel and swan neck. The radio control system installed on the SM-12 allows operations to control drilling, kinematic positioning and track movements in a safe way. The rig is fitted as standard with a double-hinged safety guard and slow rotation kit complying with the European safety standard EN16228.

The rig installed 53 piles of 450mm diameters drilled to a depth of up to 23.3m. In flight auger piles the concrete mix requirements have to be carefully designed to maintain workability yet avoid segregation and bleeding during placement. In the Ariel Way area the concrete used was C32/40 DC-4.

In the Restaurant area the project include 158 piles of 900mm diameter that were installed up to a depth of 27.2m, including probing for obstruction on each pile position; the concrete used was C28/35 DC-4. To achieve this diameter and depth with the CFA method, an 80t Soilmec SR75 rig was used by Central Piling. The SR-75 drilling rig is a multi-purpose machine that (in the 4 Line CFA configuration) is capable of a maximum drilling depth up to 29m and a maximum diameter up to 1,200mm. 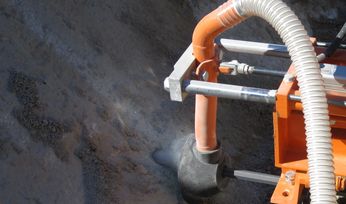 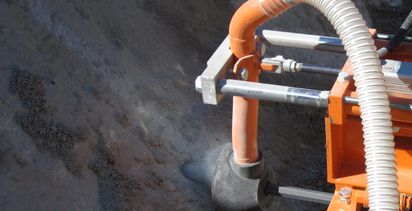