Digging for buried treasure - with a sonic drill

In the North American television mystery series, The Curse of Oak Island the Lagina brothers have turned to the drilling industry for help. In particular, a rig from Ray Roussy’s Sonic Drill Ltd. 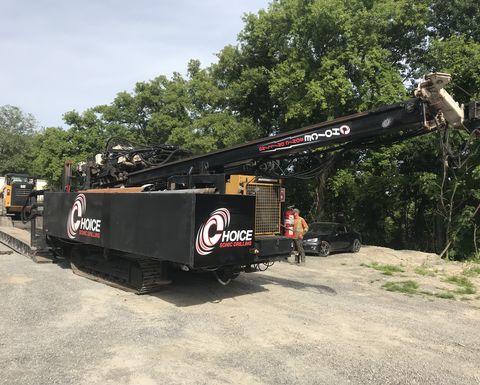 If there is one drilling project that could use the high-tech advantages of sonic drilling, it is the long-standing treasure hunt on Oak Island - an island in Nova Scotia, Canada, and home to a captivating legend about sunken tunnels, unexplained artefacts, strange stone markings and buried treasure.

The earliest published account of Oak Island treasure first appeared in 1856 and referred to a man named Daniel McGinnis (the island's first settler) who discovered a depression in the ground around 1799. The depression was believed to be proof of a dying sailor's admission that millions of dollars of Captain Kidd's treasure had been buried on the island. Digging into the depression, McGinnis discovered a layer of flagstones two feet below and promptly named the borehole the ‘money pit' thinking that there was money in the bottom of it. Unfortunately, McGinnis failed to find any treasure when the pit unexpectedly flooded with sea water.

Over the ensuing decades, with reports of possible wooden chests, human remains, stone structures, cribbing and tools, the legend of Oak Island ignited an enduring fire of belief that something is down there. The myths swirling around this island included more than just Captain Kidd's treasure, too. Some say Marie Antoinette's jewels are hidden there and, in 2017, a 500-year-old brooch containing a large garnet was discovered, adding some validation to that idea.

Other theories speculate that Masonic markings may indicate the involvement of Templar Knights in hiding significant religious artefacts while some believe that original Shakespearean manuscripts are entombed below ground in a sacred vault. And then there is the prophecy which predicts that seven people will die before the treasure is found. Sadly, to date, six have perished in accidents over the years.

Clearly, Oak Island has all the makings of a great story - a mysterious curse, buried treasure and, potentially, the chance to unlock and reveal an intriguing chapter in history. The Oak Island mystery was enough to enthral even the rich and famous. US President Roosevelt, stirred by family stories from his grandfather (and Oak Island financier), began following the mystery in late 1909 and continued to follow it until his death in 1945.

Rear Admiral Richard E. Byrd, Jr. was an investor in Oak Island and monitored its exploration status for years along with his friend, President Roosevelt.

Actors Errol Flynn and John Wayne invested in the Oak Island treasure dig, providing funds and drilling equipment while William Vincent Astor, heir to the Astor family fortune after the death of his father on the Titanic, was also an investor.

Along the way, there were numerous other individuals and companies that added their efforts to lift the veil on Oak Island, up to and including the latest search team, headed by brothers Rick and Marty Lagina who now own most of the island. In January 2014, Prometheus Entertainment and the History Channel turned their quest into an active reality TV show which is currently in its sixth season.

Bring in the sonic

Over the past 160 years, there has been a lot of drilling on Oak Island and, naturally, one would expect that some evidence would have been found. Certainly, a number of tantalising clues have emerged along with bits and pieces of artefacts but, disappointingly, the treasure remains just out of reach.

As an example, back in 1849, the Truro Company was formed by investors who re-excavated a shaft back down to the 86ft level. Like before, the money pit flooded, and it was decided to drill into the ground beneath the bottom of the shaft. According to a 19th-century account, the drill (pod auger) passed through a spruce platform at 98ft. After this platform, the drill hit layers of oak, something described as "metal in pieces" another spruce layer and, then, clay for 7ft.

For drillers of that time period, this would be a nightmare project. Oak, metal, spruce and then clay is enough to jam up most drills and cause significant deviation off the target drill area. In those days, there was no sonic drilling technology and it would have been tough slogging for those old-time drillers. But, just like many other industries, drilling has evolved and embraced new techniques although none more revolutionary than the adoption of sonic drilling technology.

The early roots of sonic drilling technology can be traced back to the efforts of George Constantinesco, a Romanian intellectual who immigrated to England in 1910. Constantinesco formulated the "Theory of Sonics" which was published by the British Admiralty in 1913 and, during that same year, he demonstrated a prototype of a rock drill working on a percussion system, with much success. Unlike pneumatic drills, Constantinesco's vibratory prototypes were capable of boring through hard granite rock, quietly and smoothly.

Similar to the history of Oak Island, there were numerous other individuals and companies that tried, in vain, to perfect the sonic drill. Finally, in 1982, it was a Canadian mechanical engineer, Ray Roussy, who was able to successfully patent and commercialise a robust sonic drill rig. Its performance claims were so breath-taking that some believed Roussy was grossly exaggerating until they personally saw one in action. Today, his technology is in use across six continents and in every application imaginable.

Fast forward to 2018 and the foresight of a geologist working with the Oak Island search team who suggested that a sonic drill rig should be brought in. A call to Roussy's company, Sonic Drilling Ltd, was made and, before long, a rig manufactured by his other company, the Sonic Drill Corporation, but now owned and operated by Choice Sonic Drilling in Toronto, Ontario, was dispatched to Oak Island along with a crew of three and a box truck to hold the rig's 4 x 6 drill pipe system.

"The whole crew and I have been fans of the Oak Island TV series for five years," says Brennan McMahon, president and founder of Choice Sonic Drilling, a company that only uses sonic drill rigs and has worked on high-profile projects all the way from Manitoba to Labrador. "We always thought that Oak Island needed a sonic out there."

Not surprisingly, the sonic rig turned out to be ideal for the task. With a mix of sand, gravel, clay and bedrock, traditional drills often bog down or experience a large deviation from their intended drill path in those conditions. "Accuracy is everything in a treasure hunt," says McMahon. "Previous holes on Oak Island often deviated by about 10 per cent which amounts to 20ft off on a 200ft. hole!" 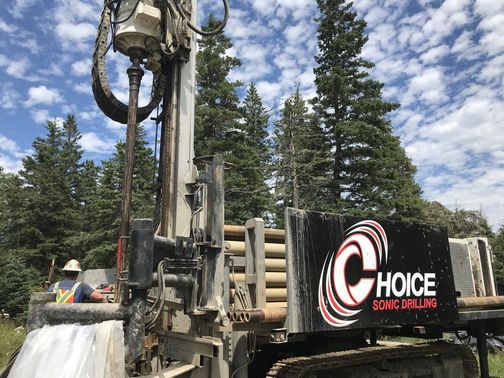 Understandably, 20ft is a massive miss when trying to hit a specific target area. Unlike regular drills, the sonic drill experiences very little deviation (1-2 per cent), leaving it able to bore nearly perfectly straight down which is a huge asset when searching for buried treasure.

Although the sonic drill's blistering speed (3-5 times faster) is typically its most prized ability, that did not turn out to be the case on the Oak Island project. "Speed was the least important and sample accuracy was the most important benefit… they had never seen accuracy like that before," explains McMahon.

Sonic drill rigs are also capable of providing continuous, undisturbed core samples to a depth of 300ft, which was another advantage and one that provided the Lagina brothers with the best possible information to base their next drilling decisions on.

Despite drilling for weeks in challenging conditions, there were no breakdowns which McMahon says attests to the reliability of Roussy's patented sonic drilling technology. "It impressed me again," he says. "After 25 years, it still impresses me what a sonic can do."

So, what did the sonic drill find? "I can't tell you that," says McMahon who is bound by confidentiality agreements with the TV production company. "You'll have to watch upcoming episodes to find out but I can tell you that they were very happy with the results and I think viewers will find it very interesting."

McMahon added that it was a real privilege to be a part of the TV program. "It was very exciting… you get a little nervous at the beginning because you normally don't get miked up to go drilling," he says with a laugh.

To find out what the sonic rig discovered, you will have to tune into History Channel's The Curse of Oak Island. 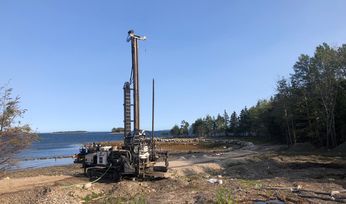 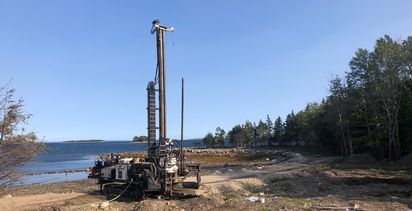