The past, present and future of core orientation

Lori Martin, who manages the Canadian Commercial Business at Boart Longyear, discusses the past, present and future of core orientation. 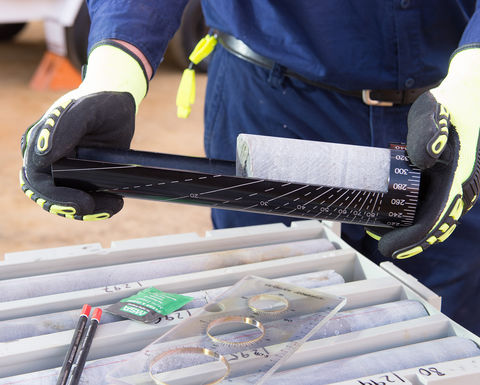 Boart Longyear is at the forefront of core sample orientation technology

For exploration, detailed structural information is generally scarce at early exploration stages because outcrop is scarce. Oriented drill holes provide an opportunity to measure the orientations of hydrothermal elements that then influence the interpretation of surface chemistry, lithological and structural elements that influence the construction of geological models.

Historical limitations in oriented core systems have prompted many data points to be dismissed, a lot of errors would be introduced with these older devices.

Before electronic tools, there were mechanical systems that relied heavily on gravity markings. There were spears that would make the mark on the core, or the indent of a metal disc and more recently the markings from a nail and a coloured pencil.

Oriented core is increasingly playing an important role in deposit definition and structural analysis. It allows the exploration teams to make more informed decisions and thus reducing costs and time in wasted drilling. It is the best way to determine the true direction of the mineralisation of a geological feature, deposit and/or the associated structure.

This critical information reduces the risk of misinterpreting the orientation of a deposit and therefore allowing the company more information for design and stress interpretation.

Genuine raw data without error permits oriented drill data to be captured in a database and used in the build-up of geologic models and resource estimations. Where the exploration activities are in environments of high structural intensity such as bedding, foliation, and faulting or jointing; oriented core datasets can be plotted on stereonets to indicate structural orientation. Often strong datasets will prove to have multiple directions of structure.

Recently, it came to the market's attention that a publicly listed exploration company may have wasted a considerable amount of investors' money by drilling in the wrong locations and coming up empty-handed. This is not an isolated incident and there can be many causes.

One way to prevent this from happening is to make sure that infield geologists can use the latest technology to have immediate access to accurate geological data direct from the drill hole. This technology includes core orientation instruments, survey instruments, and driller-deployed geophysical instruments and data management software.

This makes working with drilling contractors and the client company that much easier when everyone has access to real data in real-time. While this will not solve every problem, a geologist is likely to face in the field, it will reduce the risk of making poor decisions before it is too late. At Boart Longyear Geological Data Services (GDS) we give geologists and businesses quick access to accurate geological data direct from the drill hole.

Whether you are working on mining, construction or environmental projects, by working with Boart Longyear Geological Data Services you will be able to:

Lori Martin manages the Canadian Commercial Business at Boart Longyear as well as supporting its Geological Data Services initiatives. She has a bachelor's degree in geology and a master's degree in business administration.

After 100 years operating in the UK what do the next 100 years herald for Atlas Copco? Every day's a school day