A look back at the piling work undertaken by Trevi on, what at the time of construction was one of the largest civil engineering projects in Europe, the Vasco da Gama bridge in Lisbon. 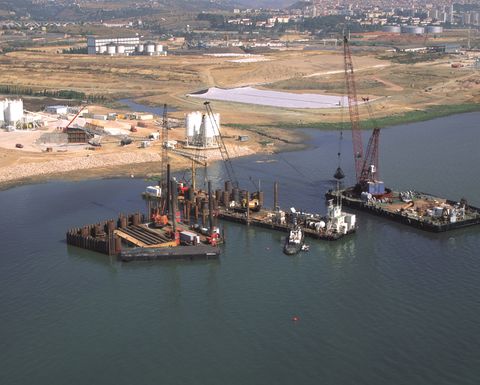 The construction of the Vasco da Gama bridge over the Tagus river, which opened to traffic in March 1998, was one of largest civil engineering projects in undertaken in Europe.

With its 18km of extension, the bridge greatly alleviates traffic congestion of the city centre, by completing Lisbon's ring road network it also provided a new route for vehicles travelling between northern and southern Portugal and Spain.

The bridge, carrying six lanes of traffic, three in each direction, extends along viaducts for about two-thirds of its whole length: about 10km are over water and the remaining on land.

Three navigation channels are provided; the main one allows the passage of up to 30,000t vessels, under a cable-stayed bridge, which gives a clearance of 45m above high water level.

Strict environmental protection rules have been adopted in order to safeguard the river ecosystem and for the recovery of the Samouco salt craps, in the Southern area, to become a Natural Reserve.

Starting from the North, the project was subdivided into four main parts. The first was the 670m long, overland Expo Viaduct. Then there is the main bridge, over the water it has two pylons of 150m in height and a main span of 420m and the two side ones of 205m. The third component, also over water, is the Central Viaduct, which was extended for 6.5km and includes the two navigation channels of Cala de Barcas and Samora. Completing the project is the overland South Viaduct with a length of 3.85km, which includes service areas and Montjio crossings.

In addition, thanks to its efficient job-site organisation and due to meeting the construction schedule and quality requirements, Trevi was awarded further contracts on the project. These included the marine construction of cofferdams for the four main bridge pylons, including steel sheet piles driving, inside dredging, piles trimming, underwater laying of a double geotextile layer spaced by a gravel filter and final underwater 1.5m thick concrete plug. The manufacturing and assembling of two 130m long jetties, as temporary works for site services. Two load tests over water for driven piles, and the construction of 64 bored piles, 2,000mm in diameter, for the piers of the viaduct sections over Cala de Barcas and Samora navigation channels. 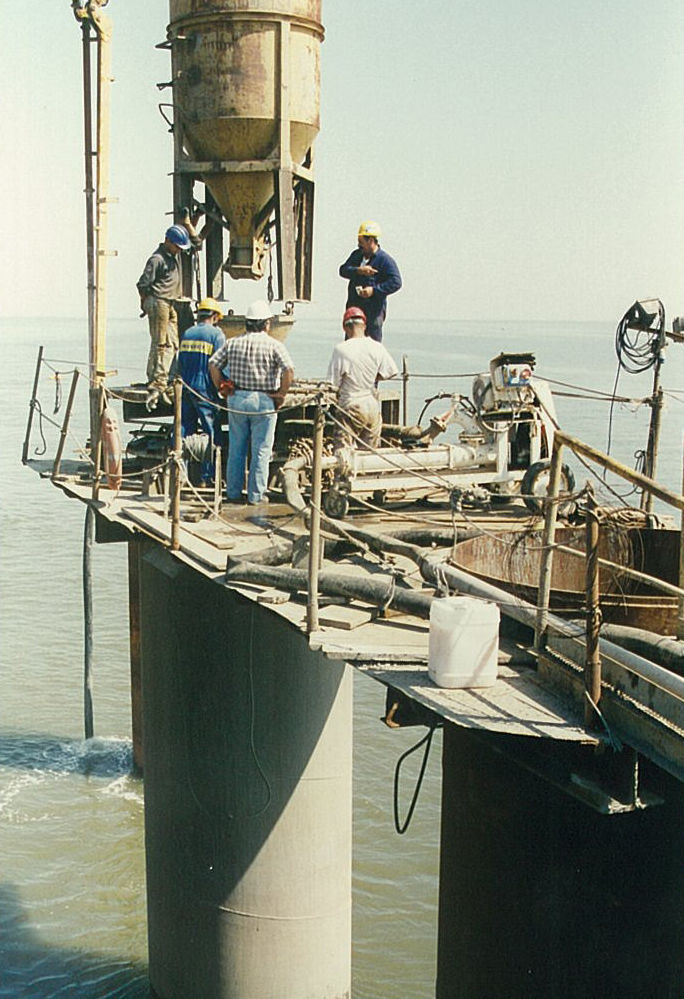 The work undertaken by Trevi did not end there as the company was also awarded the manufacturing contract for the permanent steel casing adopted for the construction of bored piles. About 5,200t of steel were processed in a purpose-built factory on site.

The offshore bored piles' excavation method used by Trevi had been widely tested in several similar works performed all around the world. The bridges on Paranà river in Argentina, Third Mainland Bridge in Lagos, Nigeria and many bridges over the Po river in Italy were all based on bored piles constructed by Trevi.

The rotary and Kelly system proved to be the most suitable one for the 2,200mm diameter - 75m depth - piles for the crossing of Tagus river in Lisbon.

The adopted Soilmec equipment proved its particular advantages: the high excavation rate and the high-reliability degree.

The soil excavation, inside the casings and up to the final depth, was performed by rotary and Kelly system, in the presence of a polymer-based drilling fluid, the advisable solution to minimise environmental pollution. Polymers drilling fluid dosage and physical parameters were adopted after several tests performed both in a laboratory and on-site.

The laying of steel reinforcements proved to be one of the most difficult phases in the pile's construction process. Specially designed lifting equipment and precise operational procedures were adopted to maintain quality and safety requirements in the laying of 30t steel cages manufactured with 56mm main bars and equipped with six pipes, 2in and 5in in diameters, that were utilised for the non-destructive tests that were performed on all the piles.

The concrete for the piles was supplied and pumped by a floating concrete plant of 120m3/h output and with an aggregate stocking capacity of 580m3.

The main and ancillary pontoons were specially designed and equipped to satisfy all the different requirements in terms of production phases and various associated tasks.

The ‘Fittone' main barge was prepared to insert the permanent casings, to bore the piles and was also utilised as preparation and processing plant for the drilling fluids.

Debris resulting from boring operations was loaded on barges with opening bottom and transported to selected undersea waste deposits.

Trevi collaborated closely with the main contractor, adapting equipment, personnel and programs to the site's specific requirements, especially in the starting phase for the site installation and preparatory works. 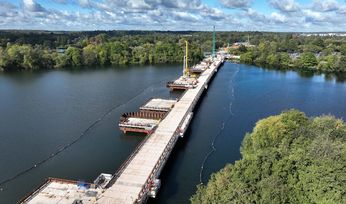 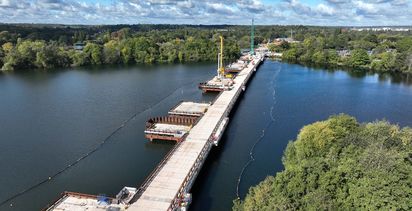