Foundation piles for the Elbtower reach a record depth 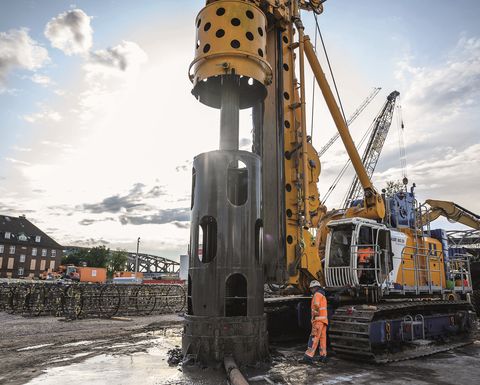 Since 2001, the HafenCity district, which is close to the historic Speicherstadt area, has been a project of superlatives. Built on a former harbour and industrial area covering a total of 157 hectares, the project in Hamburg is planned to be completed in the early 2030s. It will consist of more than 7,500 apartments for around 15,000 residents as well as office and service locations for over 730 businesses and up to 45,000 employees.

In addition, the site will include an expansive park with a tobogganing hill, an enclosed shopping centre with movie theatre, cultural and educational institutions, hotels and leisure areas. In January 2017, the opening of the Elbphilharmonie (Elbe Philharmonic Hall) in the west of HafenCity was the first highlight.

In the eastern area, the Elbtower is planned as the concluding project. At 244m, it will be the tallest building in the Hanseatic city and the third tallest high-rise in Germany after the Commerzbank Tower and the Messeturm (trade fair tower) in Frankfurt am Main.

The Elbtower is situated between the bridges over the river Elbe and will feature an observation deck at the top with a spectacular view over Hamburg. It will also provide office, retail and gastronomy areas, a hotel, a boarding house, co-working spaces, fitness and wellness areas, and a children's play area. Furthermore, around 600 parking spaces and boat storage will be available. A restaurant at a height of 200 m is being discussed, too.

Completion of the Elbtower is planned for 2025; ground will be broken in 2021. In preparation, Bauer Spezialtiefbau GmbH was commissioned by Signa Real Estate Management Germany GmbH to execute comprehensive load tests using test piles built specifically for this purpose.

Because the ground surface near the river Elbe has a low load-bearing capacity as a result of the deep, cohesive soil stratum, the structural load must be transferred to the subsoil, which has deeper, load-bearing soil stratum, to prevent long-term settlement of the building.

To this end, in August the initial test piles were installed with a depth of up to 111.4m and a diameter of 1,850mm - the longest piles ever to be executed in Germany.

"The load tests with the test piles will allow us to analyse the ground behaviour and structural load in order to determine the most economical foundation," said Andreas Wedenig, project manager at Bauer Spezialtiefbau. "Two of our test piles will be subsequently integrated into the finished building. Two are only for testing purposes."

The test piles for the Elbtower are slurry-stabilised large-diameter bored piles, installed using the Kelly method. In this process, the drill tools are attached to a telescopic Kelly bar. The ground is incrementally dissolved and brought to the surface. The procedure is typically carried out with the help of a steel casing pipe that is placed in the ground beforehand.

However, due to the huge pile depths required the pipework was foregone as much as possible. Instead, slurry stabilisation was used. With this method, only the excess fluid pressure prevents the walls of the borehole from collapsing. After reaching the planned drilling depth, the sand is removed from the suspension and a reinforcement cage is built. Subsequently, cement is filled into the borehole from the bottom to the top, pushing the suspension to the top of the borehole. It is then pumped out for re-use.

The unique part of this project is that the pile test is carried out near the base of the pile using an Osterberg cell. This is a hydraulic loading device that is built into the reinforcement cage, where it loads the pile from below.

"The actual foundation works are planned to begin in 2020; then more than 100 of these large-diameter bored piles will be created. The length, diameter, material, formation and placement of the piles can vary according to the results of the load tests. That means that the longest foundation piles could still beat the current record of 111.4m," explained Wedenig.

The XR1600E, the World's largest rotary drilling rig, is in production by XCMG 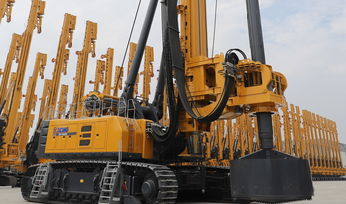 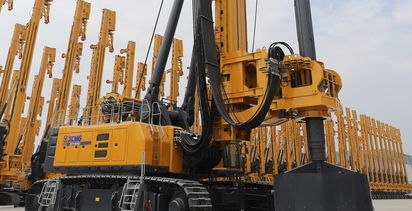 What's new in construction at CONExpo 2023