When it comes to drilling boreholes for site investigation projects there are many factors that need to be taken into account. Engineers from Socotec provide GDI with an insight into the various methods and techniques they use. 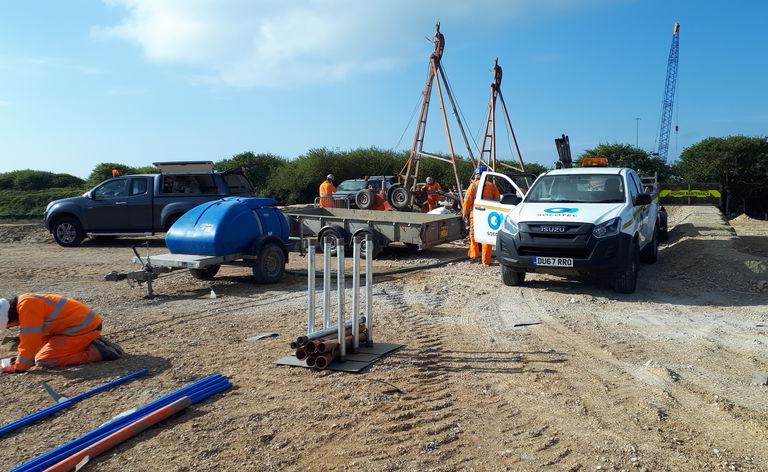 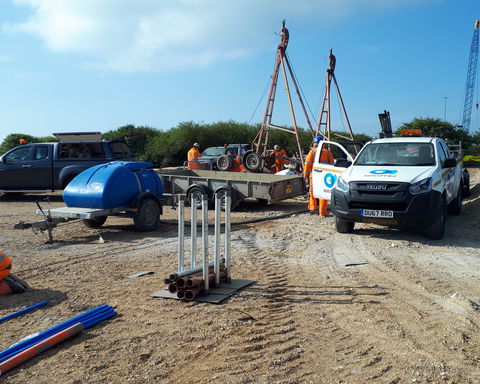 Borehole drilling is a highly cost-effective method of ground investigation, particularly when the objectives of the project are clear. Although establishing the overall distribution of materials beneath the site of interest will be common to most projects, detailed objectives will vary depending on the type of project envisaged. For example, projects involving the construction of a multi-storey building, a deep basement, a tunnel or a railway embankment would each have specific requirements that are critical to their design, and a full understanding of these is needed to obtain the best information for the borehole investigation.

The effectiveness of the borehole investigation will be enhanced by a general understanding of the ground conditions likely to be encountered and the suitability of different methods to obtain appropriate information. A variety of drilling techniques have been developed due to the need to manage the vastly different physical characteristics of natural and manmade materials that could be present. Whether the site is underlain by soft alluvial silts, dense river gravel or manmade materials containing buried structures, the success of the project will be reliant on the drilling techniques being suitably matched to the anticipated ground conditions.

The key to a successful borehole investigation is planning, with decisions on the layout, techniques, depths, sampling and testing regimes undertaken by a competent person armed with as much relevant information on the sub-surface conditions and project objectives as possible. Taking care at the design and planning stages will pay dividends in the longer term for controlling risks relating to potential geohazards, with the benefits of undertaking a desk study (and field reconnaissance) likely to be invaluable.

When undertaking borehole drilling, a comprehensive written record/log of all the pertinent details should be made. Depending on the type of drilling, this may be supplemented by a photographic record of all the soil and rock materials recovered. Generally, the log is the result of a team effort between the drilling crew and one or more loggers, the latter typically being trained geologists or engineering geologists. All those involved should be competent and experienced, with a suitable recognised accreditation or professional qualification. Where the logging process includes ancillary activities such as photographing rotary core or the preservation of sections of core selected for laboratory testing, the loggers may be assisted by others.

The information presented in the log should clearly set out the factual details of the drilling process, such as the equipment used, techniques adopted, dates and times of activities to indicate rates of progress, any samples recovered or tests undertaken during the advancement of the hole and any drilling difficulties encountered. It should also include a full description of the nature of the materials encountered at all levels in the borehole. This will present a profile that is as representative as possible of the in situ ground conditions that the borehole has passed through.

As the drilling process imposes a degree of disturbance to the materials it recovers, with some materials lost altogether in difficult ground conditions, the descriptive part of the log requires an element of interpretation that depends on the training and experience of the drillers and loggers involved. A collaborative approach is therefore essential, as a complete and accurate record of the ground will only be possible by combining the first-hand observations of the driller with the detailed assessment of the logger.

The logger is required to carry out a detailed description of all soil and rock samples recovered from the borehole. A systematic approach using standardised terminology is necessary so that all descriptions are meaningful and unambiguous to the reader. Formal guidance is provided in the British Standard BS 5930:2015+A1:2020, Code of practice for ground investigations. Although this standard has been used in UK practice for several decades, it is now fully compliant with the information contained in the European Standards EN ISO 14688-1 and EN ISO 14688-2 relating to soil descriptions and EN ISO 14689 relating to rock descriptions.

Describing materials encountered in the ground should address a few basic questions to define the general context of the material.

Firstly, it is important to determine whether the materials have arisen by natural processes or have been placed/disturbed by man. The latter, known as anthropogenic materials (or ‘made ground'), is particularly important to identify, as such materials, unless they are selected, placed and compacted in a controlled manner, are typically variable and have unpredictable engineering properties. In some instances, their identification can prove challenging because they may comprise predominantly natural materials with few features of human intervention. Under such circumstances, other evidence can be used, such as materials clearly forming part of an earth structure (e.g. an embankment).

If the materials present are considered to be natural, the next question to be answered is whether they represent soil or rock. While there is usually a clear distinction in terms of geological origin, this can be more problematic for materials where weathering can transform them from rock to soil. The distinction is generally made by the compressive strength characteristics of the material, rocks being stronger than soils.

The majority of soils are made up of inorganic particles (fragments of minerals or rocks), with logging focusing on the particle size, angularity and lithology. The names given to inorganic soils are derived strictly from the particle sizes and include clay (finest), silt, sand, gravel, cobbles and boulders (coarsest).

Most soils comprise a mixture of different grain sizes, with the logger required to apply a series of tests to determine which of those sizes present is the most ‘dominant'. This dominance is not based solely on which grain size forms the largest proportion, but rather on which fraction controls the soil's engineering characteristics. The dominant fraction is known as the primary fraction and in a composite soil it will be accompanied by subordinate secondary and tertiary fractions. Having categorised the soil correctly, the logger will focus on such properties as soil strength, fabric and colour, while also aiming to establish which geological unit the soil represents.

Grain/crystal size is a relevant factor in the description of rocks, although the mineralogy and method of formation will also play an important part in determining the appropriate rock type. The logger will need to incorporate such properties as colour and an estimate of compressive strength into the overall rock description. However, the most important feature influencing the behaviour of a rock mass is the presence of fractures. Detailed descriptions of fractures must be provided, logging properties such as fracture type, inclination, roughness, evidence of weathering and the presence of infill materials. The importance of driller's observations

The aim of borehole logging is to create a record of the in situ ground conditions. However, the recovery of material from the ground for inspection at the surface can result in disturbance of the materials, the degree of which will depend on the material type and the drilling method. For example, the dynamic sampling method (window sampling) can produce a continuous series of soil samples, but in a relatively disturbed state. Similarly, rotary coring through difficult ground conditions, particularly in weathered rocks or where there are significant variations in rock strength, can result in sample disturbance. There may also be sections of the soil or rock profile that fail to be recovered at all. In rotary core drilling, poor recovery can result in the erosion of soil or weak rock by the drilling flush, or by sections of core becoming jammed in the core bit. In cable percussion boring, individual samples are taken by the driller, rather than the full soil profile being retained.

Sample disturbance and potential gaps in the soil/rock profile always need to be taken into account by the logger, with observations made by the driller being crucial. In cable percussion boring, the driller is normally better placed than the logger to note the depths of changes between material types, and rotary drillers will be able to indicate probable reasons for any problems with core recovery. The use of drilling parameter recording is beginning to be recognised, providing valuable additional information in these situations.

Although the logging process is primarily focused on the inspection of samples, certain descriptions of the materials encountered will rely on the results of in situ tests that are routinely carried out as part of the drilling process. These may include standard penetration tests (SPT) to determine the relative density of coarse-grained soils, and borehole vane tests to determine the undrained shear strength of soft cohesive soils. Understanding the ground conditions also provides context for the more expensive field tests, such as water pressure (packer) permeability tests and pressuremeter testing.

While the principles of many drilling methods have remained largely unchanged for many years, the widespread availability of mobile devices such as smartphones and tablets enable borehole information to be recorded digitally at the rig side. This reduces the time and potential errors of a separate subsequent data entry method. Systems can also incorporate data validation and 'sense' checking to minimise incorrect or missing data entry. 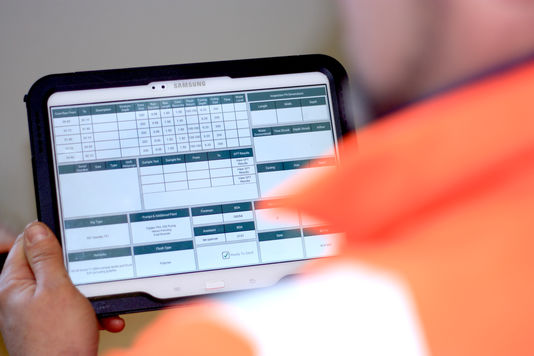 The use of a standardised framework for the digital recording, storage and transfer of relevant borehole and logging information was introduced by the Association of Geotechnical and Geoenvironmental Specialists (AGS) and has become an industry-standard extended to cover most aspects of ground investigation, including monitoring, laboratory and specialist field testing. This standardised format has led to the development of software designed to record and manage borehole data, both as in-house systems designed and used by investigation contractors, as well as commercially available systems, representing a substantial step forward in current borehole logging activities.

Considering all these factors, it may be concluded that the overall success of borehole logging will depend on the combined skills of the investigation designer selecting the most appropriate techniques, the drilling crew recording as many aspects of the ground conditions as possible and the logger interpreting the findings in the context of these various limitations. 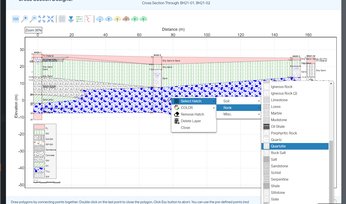 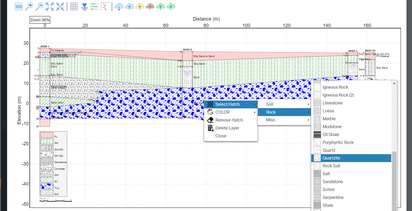