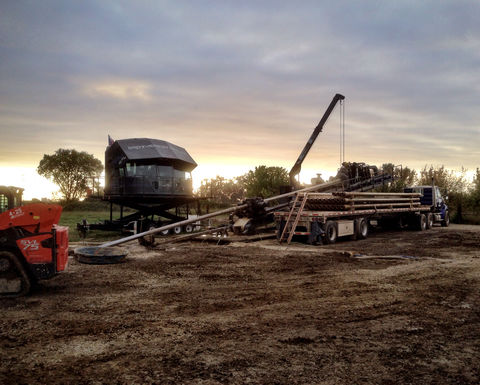 The main role of drilling fluids in HDD applications is cleaning the borehole as it is drilled, to avoid a build-up of drilled cuttings on the low side of the hole. Equally important functions are promoting hole stability, and cooling and lubricating the tools and pipe for successful installation.

Daniel Galpin, drilling optimisation specialist at AMC, explains: "We can achieve stability by keeping the hole full of drilling fluid, but also by maintaining formation integrity with adequate filtration control, encapsulation and inhibition of certain formations."

"The ideal mud will allow the bit and reamers to open a clean and stable underground pathway for a product to be installed with minimum exposure to the outside environment," explains David Horton, global technical manager at M-I SWACO, a Schlumberger company.

When choosing the right drilling fluid for HDD projects, drillers have to anticipate all the possible unwanted outcomes and build a fluid around avoiding these outcomes.

"Also, failing to anticipate swelling clay can lead to consequences costing time, money and risking the success of the operation. Having the selection of a complete ‘tool box' of drilling fluid additives and the proper engineering plan to apply those ‘tools' can give any operation the best chances for success."

Niall Meehan, managing director of Drilling Supplies Europe (DSE), adds: "The trickiest part of choosing the right drilling fluid for a HDD project is the unknown. Subject to where the project is, the geological landscape can vary greatly in a short distance. It's not uncommon to find cover sands, gravels, clays, fractured rock and competent bedrock in a single HDD."

Accordingly, it's of critical importance to identify the soil types or type, and match the drilling fluid to the geology.

The first one is coarse soils (non-reactive), including sand, rock and gravel - anything but clay or reactive shales. Problems with coarse soils include fluid loss, which equates to borehole stability and suspension of heavy solids.

"I have seen even the most experienced of drilling contractors get fooled into thinking they were in clay because they squeezed a sample of soil and it clumped together," says Dugan.

"But, when you take that same soil sample and stir it into a clear container of water (cut the top of a plastic water bottle) and stir in a sample of the soil, you may find that the water does not thicken or the material is not sticky. It may quickly settle to the bottom, and you can hear sand grinding against the bottom of the container. This is an easy but accurate way to test for soil identification.

"After soil identification is confirmed, the contractor can then select the correct amount of bentonite and the correct types of polymers and additives to match the drilling fluid to the soil and control issues such as reactive clays, suspending coarse drill cuttings, or sealing off permeable formations to keep the hole open."

Galpin notes: "Ideally investigation bores should be drilled along the proposed drill path to ascertain exactly what type of ground conditions are likely to be encountered."

AMC, he adds, has a team of fluid engineers that provide local on-site support to improve productivity, resolve challenges and train drill crews. It has access to one of the largest drilling fluid laboratories in the in the southern hemisphere, allowing it to complete accurate mud programmes and offer full hydraulic analysis of the planned borehole.

The drilling fluid is dependent on equipment to put it into action, whether its mixing, pumping, screening, analysing or maintenance.

"In a way, a drilling fluid is like a finely tuned instrument - in the proper hands it can make beautiful music, but if played incorrectly, it can cause our ears to cringe," Horton reflects.

Dugan continues: "The drilling fluid is a key component to the success of a bore, yet it is usually mixed by the newest and most inexperienced member of the drill crew.

"If the bentonite is not thoroughly mixed and yielded before the addition of polymers and additives, then it will not be capable of suspending the drill cuttings and maintaining borehole stability.

"One common mistake contractors make in mixing drilling fluid is to idle the engine down that drives the mixing pump the minute the last of the dry bentonite is introduced into the mixing hopper. At the point where the bentonite goes through the hopper and into the fluid, the mixing process has actually just begun. From that point, the pump impeller running at high speed, along with the high velocity of fluid going through the mixing guns in the tank, is required to separate the microscopic bentonite platelets in order to create a drilling fluid capable of performing all of the required functions."

The right selection of downhole tooling, drill bits, mud motors and reamers, as well as efficient solids control equipment, is necessary to maximise the efficiency of drilling fluid performance.

"The drill bits need to have the correct jets installed to get a good rate of penetration and hole cleaning, likewise with the reamers/hole openers," says Meehan.

"The drilling rate and rpm of the tooling need to be adjusted to the pump rate to insure good hole cleaning. This again is subject to the formation drilled."

The main difference between using drilling fluids in vertical versus horizontal drilling applications is how quickly the drill cuttings fall through the moving fluid; the industry term for it is ‘slip velocity'.

"In vertical wells the cuttings can fall hundreds or thousands of feet behind the drilling fluid before they settle in the wellbore, but in HDD, the cuttings have only a few inches to fall before they are lying on the low side of the hole, and begin to form a cuttings bed," explains Horton.

Dugan adds: "In a vertical rotary mud drilling application, the drilling fluid is moving upward at an annular ascending velocity of 85-125ft [26-38m] per minute, while the force of gravity is pulling the opposite direction. It is far easier to remove cuttings from a vertical drilled hole, because we just have to move cuttings out of the hole faster than they can settle.

"Horizontal directional drilling requires much more gel strength to suspend cuttings because the flow is horizontal at a much lower velocity and gravity is downward."

In order for a drilling fluid to keep a hole open, Dugan continues, two things are required:

"If operations allow, it may be possible to recycle (condition and re-use) the drilling fluid. In some cases the fluid is converted so it is no longer a fluid. A handful of chemicals can be added, such as fly ash and cement, to solidify the fluid into a disposable solid," notes Horton.

Drilling fluid is often processed through a reclaiming system, consisting of a series of shaker decks with screens and hydro cyclones.

"This physically removes drilled cuttings from the drilling fluid and allows spoil to be disposed of via conventional means. The recycled clean water is subsequently reused during the drilling operation," explains Galpin.

According to Dugan, who is based in the US, the disposal of drill spoils is becoming increasingly difficult for drilling contractors.

"In the past, contractors could find fields or pits where the material could be dumped, but regulations are getting more restrictive," he says.

"Landfills will not take material with free liquids because it will cause trucks to get stuck and the material will plug up the landfills leachate collective system. Dewatering is an option, but it requires expensive liquids/solids separation equipment and flocculation equipment along with trained personnel to operate it.

"Solidification is an easier and more practical option for drilling contractors, and my employer [CETCO] offers three different solidification products. Once the material has been solidified, it can be sent to a landfill, backfilled on a location (if regulations permit), or hauled off to a solid waste disposal."

There is a range of drilling fluid products on the market for HDD applications, and some of the latest advancements in HDD-related fluids are flowing down from oil field-based technologies.

"This includes the introduction of non-invasive fluids and amine-based clay inhibitors, such as AMC Shalehib Ultra," Galpin says.

"AMC Shalehib Ultra is effective in formations containing shale and reactive clay, and reduces the potential for bit balling, torque and drag. This product has minimal chloride content, making it far more environmentally acceptable than potassium chloride, which is typically used for inhibition. Our specialist HDD drilling fluids and equipment are designed for complex bores to be completed more efficiently, and most importantly, within budget."

Bentonite has been used as part of the drilling process for many years now; what's different is the additives now included that allow for a simpler mixing process for the contractor for drilling varied ground conditions.

"Drilling fluid and lubricants from companies such as Matex and a product that DSE offers, ClearBore, offer an environmentally safe option, reducing the risk when drilling beneath watercourses, and reducing the disposal costs," says Meehan.

"Drill rigs that are equipped with dual wall pipe are at an advantage when drilling hard formations over short distances (up to 300m). The inner rod is used to spin the drill pipe and the outer provides direction. Compared to a conventional rig using a mud motor, this technique requires a lower flow rate, meaning a smaller rig and fluid cleaning system.  Another advantage is that a tighter radius can be achieved.

"There is also the option of using a down-the-hole hammer to drill the pilot bore with a dual-pipe machine and reverting to a conventional fluid-based system for hole opening."

M-I SWACO's research and engineering team is working on a number of new innovations at any given time.

"Additives that are easy to mix and pump but can change state from liquid to solid have seen recent success, and their use is on the rise," notes Horton.

"Advancements in equipment for mixing drilling fluid, and even packaging of the additives have also offered improvements to efficiency in operations and help minimise environmental impact. In contrast to previous decades, recent innovations have the assistance of simulated drilling scenarios using software and can create virtual drilling environments to optimise engineering and planning of projects. Fluid behaviour in rheology, hole cleaning ability and pressure management can now all be modelled and predicted with use of drilling fluid software."

Overall, the industry is getting a better grasp and understanding of how drilling fluids rheology equates directly to the success and or failure of a horizontal direction drilling project.

"When I first started working with large river-crossing HDD projects back in 1996," Dugan tells GDI, "contractors would mix loads of high-yield bentonite and not use soda ash, polymers or additives, and end up with ridiculously high viscosity fluids that had little in way of filtration control and or gel strength.

"High-viscosity fluids not only have a devastating effect on annular pressures, but will dramatically reduce pump performance, increasing the chances of out-running the drilling fluid. For example, an 80 second viscosity drilling fluid can reduce the performance of reciprocating pumps by 50%.

"Contractors today understand that viscosity is simply the resistance of a fluid to flow and high-viscosity fluids lead to high annular pressures, which can spell disaster for a HDD project. A HDD drilling fluid that can control fluid loss/filtration, provide adequate gel strength/suspension, and control reactive soils and the lowest possible viscosity is always the best way to a successful horizontal directional bore." 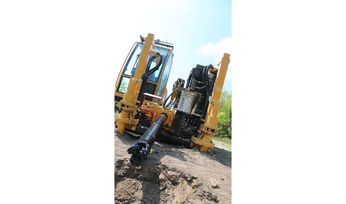 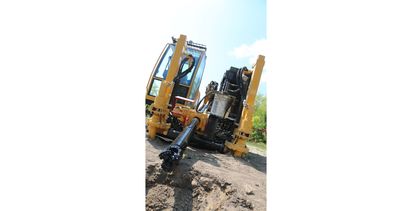