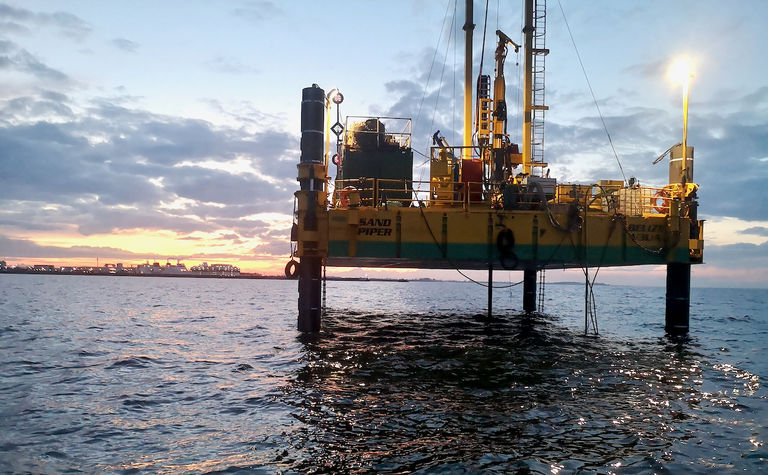 Lankelma used sonic drilling on a nearshore project for the first time at the end of 2019, during investigations for the proposed Fehmarnbelt Link between Germany and Denmark

Over the past 10-15 years, a number of technological advances have seen onshore and deep offshore techniques adapted for nearshore investigations, making them more cost-effective (and technically appropriate) to use in shallower water environments.

In cone penetration testing (CPT) for example, a huge number of cones are now available, from the seismic cone and cone pressuremeter that acquire soil stiffness information at small to medium strains, to environmental cones that enable engineers to trace and quantify the extent of hydrocarbon plumes.

Sampling can also be carried out as part of CPT and, if holes are cased, difficult strata can often be penetrated; plus instrumentation such as standpipes, vibrating wire piezometers and inclinometers installed. However, the accepted rule of thumb is that high-quality sampling is required next to at least 10 per cent of the CPT locations, to correlate results.

This sampling is typically carried out using conventional rotary drilling. However, recovery can be poor in variable shallow seabed materials, so more recently, practitioners have turned to sonic drilling. Sonic drilling uses rotation and vibrations to liquefy a narrow zone of soil and cuttings around the drill string and bit, reducing friction and making it faster and easier to drill through a wide range of soil and rock

Sonic drilling is particularly suited to sampling superficial deposits and weathered rock but is more expensive than conventional drilling per day and requires specialist operators to get the maximum benefits. And, while it has been around since the 1970s for land-based investigations, it has not been used to any great degree in marine investigations.

While compatible with mud or air flush, water can be used (and in some cases no flush at all), making the technique ideal for environmentally sensitive sites.

Sonic drilling maintains the verticality of the borehole, enabling long and continuous samples to be taken. It can also improve sample recovery percentages and quality significantly and, when combined with downhole CPT, enables very high-quality geotechnical information to be obtained.

Sonic drilling for the Fehmarnbelt Link

Lankelma used sonic drilling on a nearshore project for the first time at the end of 2019, during investigations for the proposed Fehmarnbelt Link between Germany and Denmark.

The Fehmarnbelt Link will be an 18.2km long immersed tube tunnel, carrying a four-lane motorway and two electrified train lines between Rødbyhavn on the Danish island of Lolland and the German island of Fehmarn. When the link opens - currently expected to be in 2028 - it will take just 10 minutes by car (and seven minutes by train) to complete the journey, saving about one-hour each way by ferry.

The tunnel, which will be the longest of its kind - five times as long as the tunnel section of the Øresund link between Denmark and Sweden - will comprise 89 reinforced concrete elements built at a factory in Rødbyhavn. Of these, 79 will be 217m long, with the remaining 10 shorter ‘special' elements, incorporating a basement level for plant and maintenance equipment.

The elements will be floated out into Fehmarn Belt and lowered into a 60m wide, 16m deep trench. Once connected together and sealed using huge rubber gaskets, they will be buried, to protect them from shipping above.

Lankelma was commissioned by Gardline to carry out nearshore investigations at either end of the route. One of the investigation's primary aims was to gather high-quality data about shallow ground conditions - a mixture of sands, gravels and soft cohesive soils - for the design and construction of the trench.

Eleven combined downhole cone penetration testing and sampling boreholes were drilled to maximum depths of 45m from Lankelma's Sandpiper jack-up barge, working in up to 16m of water.

Drilling and sampling was carried out using an Eijkelkamp CRS XL-Duo rig, which has a dual drill head to switch between rotary (conventional or wireline) and powerful 150Hz sonic drilling. This meant that the team could quickly change from Geobor-S rotary drilling to sonic drilling, depending on the soils encountered, to ensure high-quality sample recovery.

CPT was carried out using Lankelma's downhole Wison-APB system. This is another approach adapted for nearshore use - it has proved popular for deepwater investigations in the past.

Conventional top-push CPT remains the choice for most nearshore investigations because the equipment, methodology and the data produced are familiar to engineers, operatives and clients - plus it is relatively simple matter to adapt the approach for overwater work. However, while downhole CPT is more expensive and uses specialist equipment, it offers a number of advantages for larger, more complex investigations such as the Fehmarnbelt Link investigation.

Downhole CPT systems are capable of testing to greater depths than top-push CPT and have much faster production rates. Plus, they are also able to cope better with harder, more variable geology. On, this project, the wireline CPT system was upgraded from the standard 100kN to 150kN, to increase push capacity.

A major challenge when carrying out CPT over water is that marine sedimentary sequences tend to comprise very soft alluvium and gravels overlying highly variable materials of differing strength, including rock strata.

Softer materials do not give sufficient lateral support to prevent rods bending in a top-push system. If a hard layer is encountered, then the entire drill string needs to be withdrawn and the supporting casing advanced by drilling before running the CPT rods back to the base of the hole. This is particularly time-consuming at greater depths. 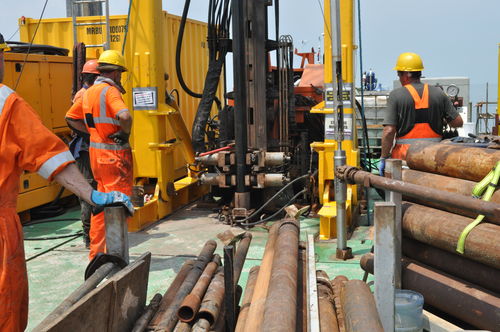 Top-push CPT also often requires the installation of two sets of casing through the water to the sea, river or lakebed to ensure the rods are not affected by water flow.

However, as downhole systems are deployed through a single drill string, set-up times are significantly reduced. The tool is simply lowered into the borehole via an umbilical cable (including data exchange cabling) with an electrical constant tension winch and carries out the test. And, if hard layers are encountered, the tool can be withdrawn quickly to allow drilling or coring.

The Wison-APB system is suitable for both offshore and nearshore investigations, and its specially designed 15m high derrick can be disassembled to fit inside a standard 40ft (12.2m) shipping container.

It is basically a double-acting cylinder, with the cone attached to the end of a piston rod. Powered by its own battery pack, the system can perform CPT and vane tests, as well as taking soil samples using a Shelby push sampler. Seismic, magnetometer and conductivity tests can also be carried out.

Changing between CPT and sampling takes minutes. The cone is locked into place during tests and then withdrawn to allow sampling. When the ground becomes stiffer, or when taking very short push samples, the 1.5m long inner barrel can be used to advance the borehole with rotary coring.

The 3m tool is used when carrying out CPT boreholes, overlapping at 2.5m intervals, with the cone withdrawn and secured during drilling to test depth. In harder materials, the shorter 1.5m tool can be used, which has higher pushing capabilities.

The entire operation is controlled from topside and, as with top push CPT, viewable in real-time on deck by the engineer.

The ability to withdraw the downhole tool quickly also minimises downtime in the event of a breakdown and makes it easier to check, maintain and replace CPT cones, improving data quality. In fact, data quality in downhole systems is comparable to top-push. Even though the test is not continuous, tests can overlap to gather continuous data for the entire investigation depth.

Traditionally, nearshore investigations have involved drilling conventional boreholes to take samples and SPT, with CPT carried out within a metre or so of each borehole location.

The Fehmarnbelt Link investigation demonstrates how practices have moved on in recent times. The ability to switch between drilling techniques such as sonic, conventional rotary and cable percussion drilling means the most difficult ground conditions can be overcome quickly, with relative ease.

Additionally, multi-purpose downhole tools mean testing and sampling can be carried out in the same borehole, allowing SPTs to be replaced by the more accurate and detailed CPT, which provides data that can be used directly in the design. 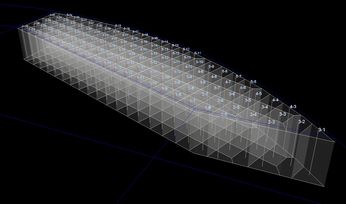 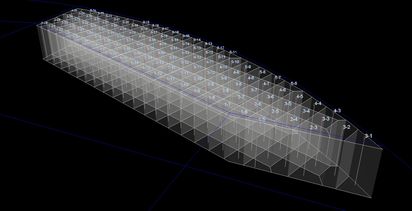